You ever seen someone push a domino before?

One domino is pushed, and a bunch comes toppling down.

‘Are you saying that’s what it’s like with habits??’

Just picture that domino scenario with me real quick. 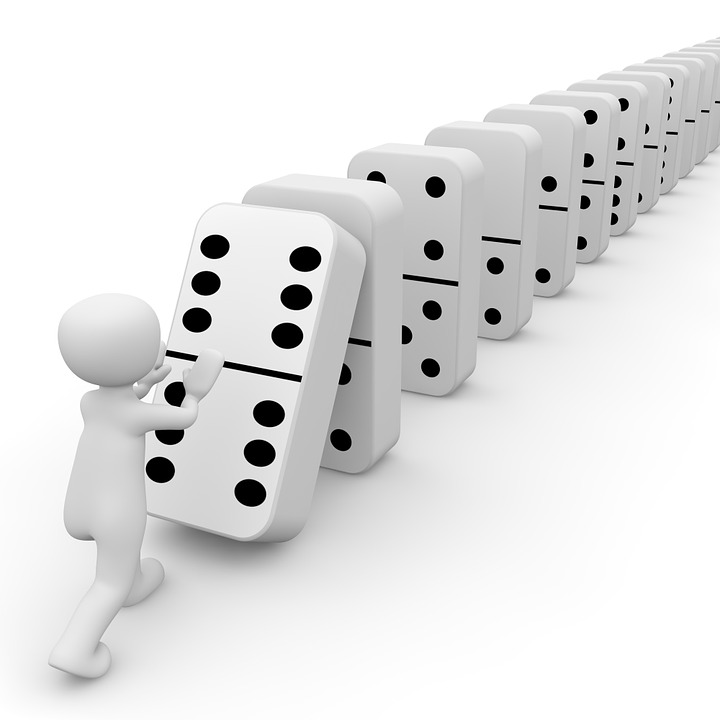 That’s the kind of world we live in.

Not only is the world we live in interconnected, but so is our body and mind.

The macro and micro are identical.

‘I thought you were going to talk about breaking the bad habits I’ve piled on?’

Yes, that’s precisely what we are going to do.

And for us to do that, first acknowledge the interconnected…

It will make your journey easier.

One person’s bad habit is another person’s relaxation.

Let’s give an example.

A highly productive person who is a great businessman, fit, and takes care of his family.

He ends the day with video games.

At this point, he has to end the day with video games to unwind.

That’s up for debate.

This is also a lesson.

Trying to eliminate every single bad habit may seem noble, but it’ll often cause you to implode.

A human is not meant to be ‘perfect.’

Even machines have bugs and need downtime.

If this human is productive in so many other facets of his life, then video games may go from a:

Before classifying something as a bad habit, acknowledge interconnectedness.

If this person is playing video games so much that it is destroying his business, fitness, and relationships…

Then it’s a bad habit.

Otherwise, it’s smart to consider it as rest.

How to Stop a Bad Habit

The trick to stopping a bad habit comes down to:

Let’s break down this formula.

Typically, for number 1, the person attaches the feeling they get DURING the habit with the habit.

Let’s use Adam the Alcoholic as an example.

Adam drinks a lot because he enjoys how he feels while drinking.

However, he hates the way he feels the morning after drinking.

The reason that Adam is in the loop of drinking a lot is because once his hangover is gone, he forgets the hangover.

Then the next time the thought of alcohol comes in his mind, he envisions how he felt WHILE drinking.

This is a smart time for Adam to remember how he felt the next morning during the hangover rather than while drinking.

This will associate a feeling of disgust with the act.

Now off to the 2nd part of the formula… replacing the bad habit.

Some people quit cold turkey and never look back.

I knew this one kid who was obsessed with weed.

Once he got high, he’d would eat tons of fast food.

After some time, he met this girl on a dating app.

The picture he posted was of when he was skinny.

2 months go by, and she wants to meet him in person.

He’s alarmed!! He is fat as fuck and needs to lose 30 pounds.

For the next couple of weeks, he quits weed and starts exercising.

After the weeks were up, he never touched weed again.

He stopped exercising too.

I initially thought he replaced the weed with the gym, but that wasn’t the case.

Therefore, it’s possible to quit turkey if the desire is strong enough.

However, that’s not the optimal path.

Much better to replace the bad habit.

This is when someone may immediately say, ‘replace it with something productive.’

But I recommend replacing it with something ‘fun first and hopefully productive.’

The brain will often choose the path of least resistance.

I know a guy who quit smoking by eating Reese’s peanut butter cups.

Although the candy isn’t productive, it outweighs the negative effects of smoking.

After he stopped smoking, he found a way to replace Reese’s with healthy brownies.

The Mindset to Breaking the Bad Habit

Thus far, you’re probably going through this article and are like:

‘This idiot is not being forceful like I expected. I thought he was going to vehemently tell me to just stop the bad habit!’

These machines have a thing called the subconscious mind.

The subconscious mind is beyond logic.

I know this because there were many times I tried to logically stop a bad habit.

And each time, I took an L.

It’s smarter to view yourself as an emotional creature with a high likelihood of fucking up.

If you’re really smart, you should think the likelihood of you fucking up is 95%.

Ironically, you become way more creative and prepared that way.

Sort of like how you become more patient when you assume a rude person doesn’t know any better.

That’s when you empathize with the rude person rather than clap back.

Likewise, assume that you are an emotional creature before a logical one.

This mindset will lead to more significant improvements.

Breaking the Bad Habits & Creating a New You

View habits as software that run without you thinking.

You’re capable of installing new software at will.

However, gotta get rid of the viruses as well!

When dropping bad habits, avoid viewing yourself as ‘too perfect.’

Fighting the subconscious mind is like swimming against a tsunami.

Rather than swim against the tsunami, surf ALONG with it.

Identify if the habit is really bad or if you’re just chilling.

You can view it as bad if it’s spilling over to other parts of your life.

Then associate the feeling of how you feel AFTER doing the habit with the habit.

And finally, find a respectable habit to replace it with and ease yourself out..

Enjoyed this practical look into self-improvement?

If so, then you’ll enjoy the practical strategies into skill building & habit formation in the Level Up Mentality Book!